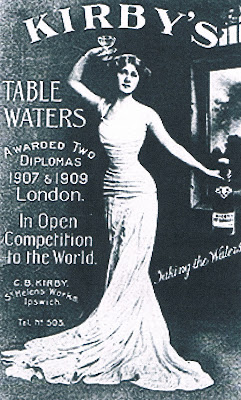 I was asked a few days ago whether I knew anything of Kirby's Mineral Water Manufacturers in Ipswich, I didn’t, so I thought I’d try to dig up some information on this local business. I wasn’t really aware that the late Victorians drank anything other than tea, coffee, milk, alcohol (especially beer) and ‘tap’ water.

There were a few fresh water springs in and around the centre of Ipswich, the most well-known was Holy Wells. The Cobbold family had these spring waters sent downstream to ship to their brewery in Harwich, then later to supply their brewery at Cliff Quay. However, by the time these spring waters reached the slum areas occupied by the poorest families, it was often contaminated due to poor hygiene and sanitary conditions.

We’ve all heard that in the past almost everyone drank beer, and we assume that everyone (including the children) was walking round ‘three sheets to the wind’. However, that’s not quite true. The beer then was not as it is today.  Although the process involved in making it was much the same (it was flavoured with plants and then fermented so the liquor could be drawn off and consumed) this beer was not as strong as we would like to believe and probably not as flavoursome.  The process of fermenting was not to make alcohol but to make it safe to drink so it had a low alcohol content. In Ipswich, there is a saying that we had a beer house or tavern for every day of the year! While this is not absolutely true, there were very many and certainly far more than there are now.

So when and where do botanical brew and mineral water fit in to Ipswich’s beer loving community? 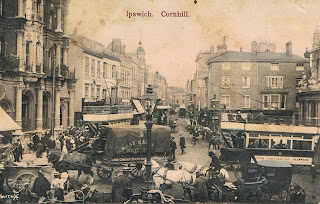 Charles and Alice Kirby were first seen in the 1901 census living at 107 and 109 Hervey Street, with their 7 month old son Robert.  At this time Charles’ occupation was Botanical Brewer.  I dangled a little man on Google Street Maps to see where these premises were.  Numbers 107 and 109 are still joined and there is even a little archway through which they probably sent off their carts to deliver the brew.

Botanical brew is a soft drink brewed using natural herbs and made by a boiling process rather than fermentation. These would be drinks like dandelion and burdock, barley water, lemonade and ginger beer. The production and distribution of these drinks in the late nineteenth century can be regarded as the beginning of the soft drinks industry and many producers switched from manufacturing mineral water to making these herbal drinks. However, the Kirby family did it the other way round.

Mineral water originated from the health spas around Europe, they thought that the waters had special properties and people went to these spas to take the waters and improve their health.  Mineral water suppliers at The Great Exhibition of 1851 changed this by introducing bottled water. Instead of having to make a costly visit to take the waters, you could have the waters brought to you. Towards the end of the nineteenth century, mineral water and non-alcoholic drinks became less about their health benefits and more about taste and quenching a thirst.  It was about this time too that these sorts of drinks became more accessible to the lower classes.

The Kirby family, made the right choice. 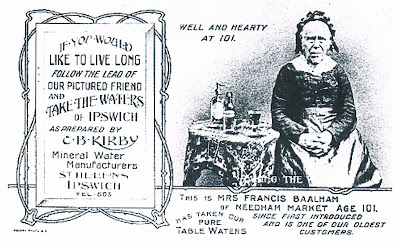 An advertisement from the early 20th century confirming the benefits of drinking Kirby's Mineral Water.

In the 1911 census, Charles and Alice had moved from their property in Hervey Street into a prime site in St Helen’s, between Majors Corner and the County public house.  They now had two children; Robert aged 10 and Joy aged 6.  They also had a servant which is further evidence of their achievements. Their decision to go from botanical brew to mineral water proved to be very successful and lucrative not only in Ipswich, but much further afield as we can see from the advertisements. 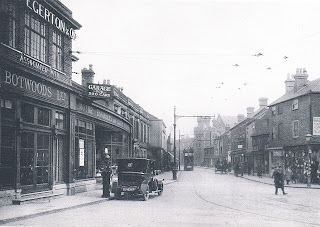 Majors Corner, looking down St Helen's Street.
Kirby's Mineral Water Manufacturers would have been on the left towards The County public house.

Kirby Mineral Water Manufacturers, I found in my trade directories, traded up until, and possibly well after, 1938.


[1]Lilian J Redstone, Ipswich Through The Ages
[2] Colin Emmins, Soft Drinks, Their Origins and History
Posted by Kim at 11:02 6 comments:

A Visit to Constable Country 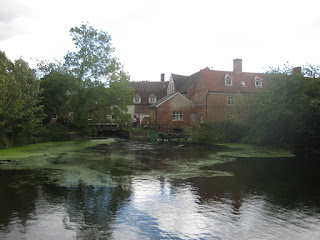 I went to Dedham Vale during the Heritage Weekend, a beautiful part of the Suffolk countryside, and had a tour by a volunteer for the National Trust.  The tour took us round the beautiful village of Flatford and showed us some of the sites painted by John Constable in the early 19th Century. 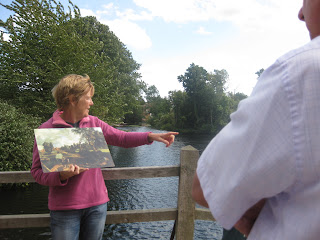 The very helpful and informative National Trust lady who showed us round. 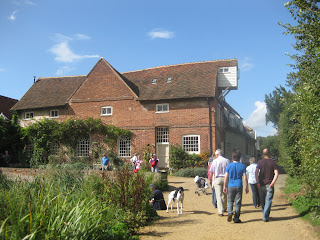 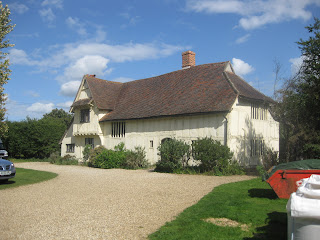 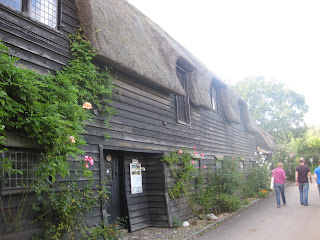 Although I’ve lived just a short way from this area all my life and have visited the site many times over the years, the tour brought a very different interpretation and understanding than I had experienced before.

1.       Constable picked Dedham Vale not because it was beautiful and tranquil but because it was a busy, prosperous and industrious agricultural scene.
2.       Constable made it his trademark to put a ‘bit’ of red in his paintings.
3.       Constable always painted his trees without foliage at the front so you could see the shape of the trunks and branches.
4.       His most famous painting ‘The Haywain’ was originally called ‘Landscape: Noon’, and there has been some argument over the cart itself.  It looks as though it is actually a log ‘wain’ as the gaps in the sides of the cart are too large for hay as it would most likely fall out.

Below are a few photos which I took during the tour with their counterpart paintings by Constable. 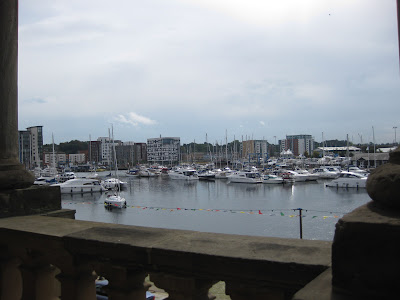 Last Saturday and Sunday was the Heritage Open Weekend. I generally miss this to take advantage of the big discounts on holidays abroad because the children are back at school.  I usually scowl in jealousy as my friends tell me interesting things about buildings on my doorstep which I’ve never visited as they’re not normally open to the public. However, we’ve decided to take a trip down to Devon later in the year, so I was able to see some of these local treasures.

I started out with a tour round Ipswich School in Henley Road, guided by none other than the wonderful Dr John Blatchly, ex-headmaster of the school, historian and writer – a bit of a hero of mine. We arrived for the ten o’clock tour but so did rather a lot of others (apparently there weren’t many at all at the nine o’clock tour). Never mind, they didn’t stop me getting my money’s worth – even if it was free! I scurried and dodged my way to the front at each room, through the usual bunch of elderly people ambling along with their walking aids, and was able to hear all the details.
As Eton is linked to Oxford University and Winchester School is linked to Cambridge, Cardinal Wolsey proposed to link his school with Christ Church College at Oxford.[1]  That’s the one they used as the basis for the dining hall in Harry Potter! The school was previously situated in the Blackfriars area[2] (down towards the docks) but the current building was built in 1851/2. 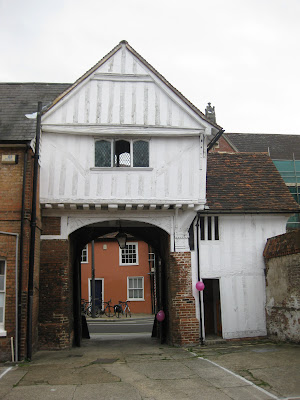 Next, we went to Pykenham’s Gatehouse in Northgate Street. I’ve always wanted to have a look up there, you can see it from the steps of the main county library in the town centre but it looks much better from the other side. It was a bit of a climb on tiny little stairs and there wasn’t much room at the top, but what a lovely building.  There was also a good view out of the windows especially looking into the dining room of the prestigious Ipswich and Suffolk club! (I don’t think they’ll be opening their doors to the public any time soon). My friend Linda was volunteering for the day - it’s always nice to have inside information. There was an interesting box containing objects which had been found when the original staircase was discovered – fascinating!

Pykenham’s Gatehouse was built in 1471 for the Archdeacon of Suffolk, William Pykenham. It is now open to the public on the first Saturday of each month between May and October. 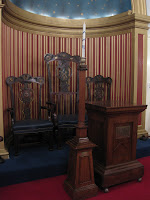 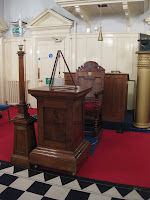 
From there we went to Admiral’s House in Tower Street and the Ipswich Institute and Library, secretly tucked away in Tavern Street, followed by a visit to the Old Customs House, Key Street, on the docks. Unfortunately, only the lower floor was open hosting an exhibition for Ipswich Maritime trust (very good) but we were allowed to climb the steps and get some lovely views of the waterfront. 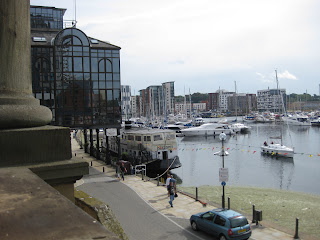 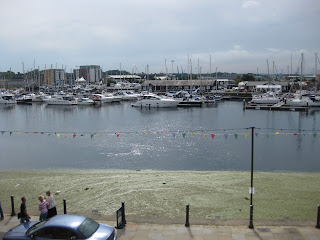 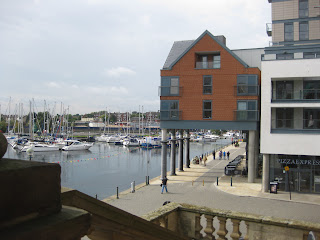 We finished the day by heading to Isaacs (I’m sure everyone knows where that is!) but were too late to get a demonstration of the machine room but stayed to partake of the brew (or rather a large zinfandel for me and a pint of bountiful for my husband).

Looking forward to next year and all the things I haven’t seen yet.