Jack the Ripper and Historic Pubs in London

My husband and I took a three day trip to London at the end of December. We visited the Science Museum, took a Jack The Ripper Tour, went to the Charles Dickens Museum, and did a tour of some of the old historic pubs of London. We stayed at the Kingsley Thistle Hotel, Bloomsbury, very near the British Museum and also very close to these two lovely old pubs... 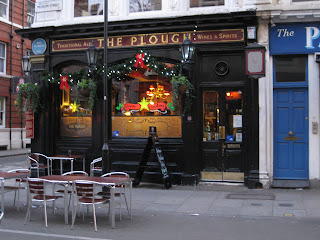 The Plough in Museum Street... 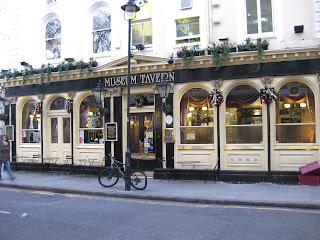 and the Museum Tavern in Great Russell Street

We visited the Museum Tavern for the first time at lunch time. It was obviously a very good place to eat (but we had already eaten) as everyone else was having food and there were no available tables so we enjoyed some cask ale sitting at the bar. We went to The Plough in the evening and easily got a seat although there was food being served.  They sold the same cask ale as The Museum so we often popped back here for a quick drink or a rest (the hotel was expensive for drinks AND made a hefty service charge for the privilege).

Before we arrived, we had booked a tour by jack-the-ripper-walks.com and decided to visit a nearby old pub before the tour started, the Hoop and Grapes in Aldgate High Street located just a stones throw from where the Ripper Tour would begin.  We arrived at about 6pm on Bank Holiday Tuesday giving us plenty of time for something to eat and to have a look at this old historic pub. IT WAS SHUT! No idea why, no explanation, the opening times said 11 to 11 on the door. Is this normal for London pubs?

Anyway, we headed down the road and had a superb Indian meal at the Baraka Eatery then ended up at the White Hart in Whitechapel High Street where we had a quick pint before the Ripper Tour. 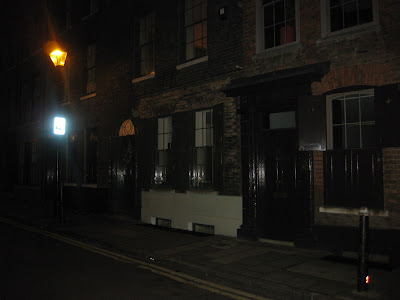 The Jack the Ripper tour was very good. The guide was very knowledgeable and very passionate about his subject and kept us well entertained throughout the 2 hours. However, it was very cold and we were all frozen by the end. We did notice other parties with very large groups so I would definitely recommend our tour which has a maximum limit of people per tour.

Our second day was spent a little differently. We started at the Science Museum and were stunned by the experience of the IMAX 3D Cinema there. We chose the underwater film 'Deep Sea 3D', it was amazing. We then had a look around the many floors of the Museum. 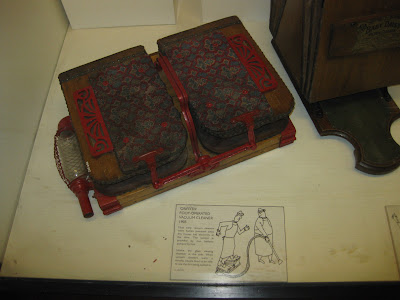 I particularly loved this early version of the vacuum cleaner where one domestic servant stands on top and steps in a lively manner while the other points the end at the dirt. Not sure how effective this would have been though! 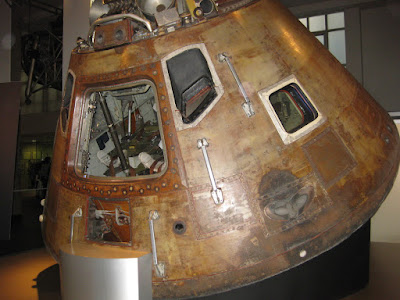 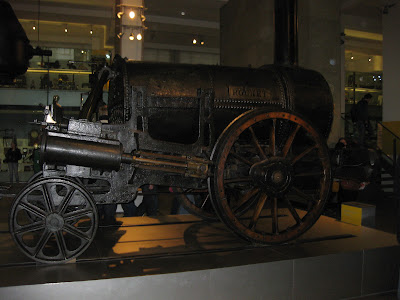 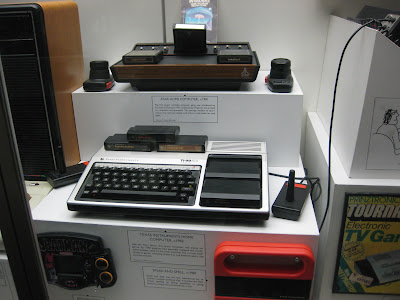 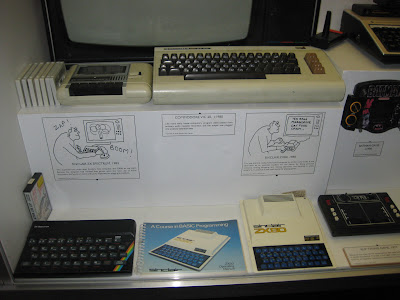 ...and some computers from a couple of years ago!

On Thursday we started with a visit to the new Charles Dickens Museum.  This is actually a house he lived in for just two and a half years but is, unlike most others, still standing. 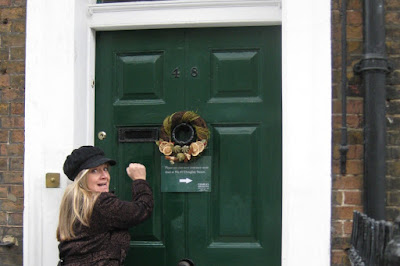 They did let me in eventually... 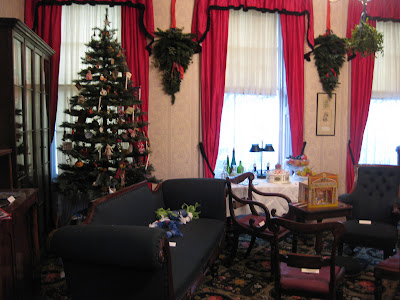 The Drawing Room set up for Christmas.

We finished our lovely three days by visiting some lovely old pubs... And a few were actually open! 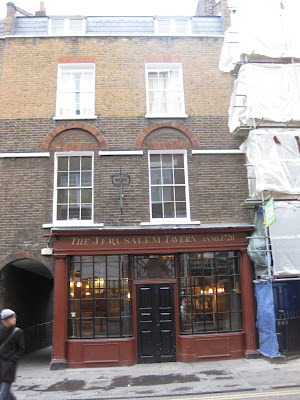 The Jersusalem, unfortunately this one wasn't...


We then headed to the Mitre Tavern where we received an extremely friendly welcome, were given an information sheet on the history of the pub and the buildings in the surrounding area and were informed that part of the movie 'Snatch' was filmed there. (It's at the beginning and Mike Reid's character is having a meeting with his fellow gangsters.) 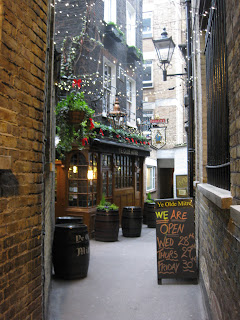 Ye Old Mitre Tavern is down a very small alleyway, hardly noticeable from the street. 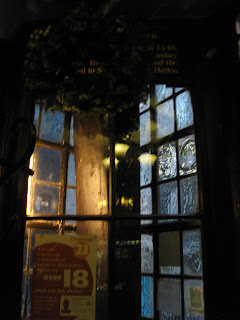 A tree trunk in the front bar which allegedly was part of a maypole that Queen Elizabeth I danced around.

Next we went to Ye Olde Cheshire Cheese on Fleet Street an amazing pub rebuilt in 1667 after the Great Fire of London. There are narrow passages and stairways connecting areas on different levels opening into dining and drinking rooms. Because of it's location, it was visited by the likes of Charles Dickens, Arthur Conan Doyle, Oscar Wilde, W B Yeats, Mark Twain and Teddy Roosevelt amongst others. 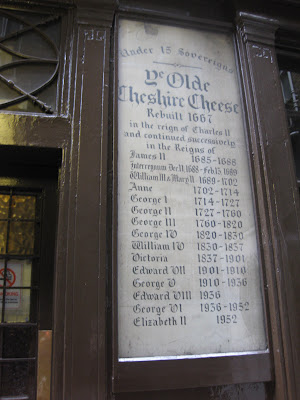 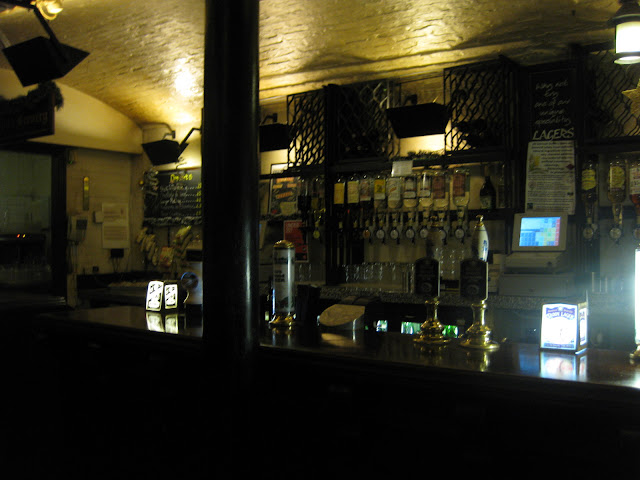 The bar in the lower dining area.

We also visited The Tipperary, also on Fleet Street, a lovely old thin building with a very long bar on the bottom floor and seating upstairs and the Seven Stars another very old building which, in my opinion, could do with a bit of 'tlc', but where I had a lovely Christmas spiced real ale served by an extremely friendly and welcoming barmaid. Unfortunately at this point heavy rain was to spoil our crawl and we ended up back in our local for the break, The Plough. But hey, there's always next time...

Many thanks to www.timetravel-britain.com/articles/london/pubs.shtml where I collected the information about old London pubs and was able to set up my route.
Posted by Kim at 05:32

Email ThisBlogThis!Share to TwitterShare to FacebookShare to Pinterest
Labels: Travel