A census has been carried out every ten years in England and Wales since 1801, except in 1941 when it was taken in very few places because of the war. Between 1801 and 1831 the government took the census to learn about the population rather than individuals so only statistics were sent to the central authorities and most of these have been destroyed. Since the 1841 census more information was included in the records collected, this information included names, sex and some other information and has gradually improved up until the latest available census which is the one taken in 1911. Any later census returns are confidential and unavailable to the public.

Census records can be accessed through all the major genealogy websites (findmypast, ancestry etc.).

For best results combine using the census records with birth records as discussed in Tutorial - Session 1.

The 1911 census was taken on Sunday 2 April 1911 and records the best information for family historians compared to other census returns. It gives you; the address, the names of everyone living in the house, their ages, their marital status, occupations, whether they were an employer or employed, and where they were all born. For me, some of the most interesting and useful information on the 1911 census return is the marriage state.  This lists how many years the present marriage has lasted, how many children had been born alive during the course of this marriage, how many were still alive and how many had died. Also, the 1911 census return differs in that the whole page, rather than a few lines, is devoted to one dwelling and you can see the signature of your ancestor.

As I said previously, you should always go backwards, so the most recent available census records are those for 1911. Mark was lucky that I already have subscriptions to some of the well known genealogy websites, so he was able to look this up straight away at no extra cost. 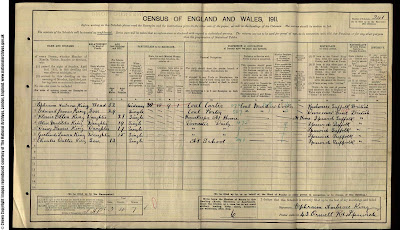 We found Ephraim, and his children; Edward, Flossie, Alice, Daisy, Charles and of course Gertrude living in Orwell Road, Ipswich. Sadly, Ephraim's marital status was a widower. Ephraim had completed the marriage state incorrectly as his wife had died, but I'm very glad he did because we found that they had been married for 30 years (this gives us a marriage date to add to our information) and that he and Matilda had had 10 children but 1 had died. We were able to find out Ephraim's occupation, a coal carter and that his eldest son John was a coal porter.  The difference between these occupations is not entirely clear but the best we have found is that the Carter drove the horse and cart to deliver the coal and the Porter carried the sacks to and from the cart. The three daughters were all Daily Domestics which meant that they were living at home and doing domestic work during the day, and just the youngest son, Charles, was at school.

This census also tells us where the children were born which also places the parents at points in time.

The 1901 Census Return was taken on Sunday 31 March 1901. Apart from the usual; name, address, marital status, the number of rooms occupied if less than five, occupation, where born and any disabilities, this census tells us: the number of rooms in the dwelling, whether an employee, employer or working on one's own account, whether working at home or not. 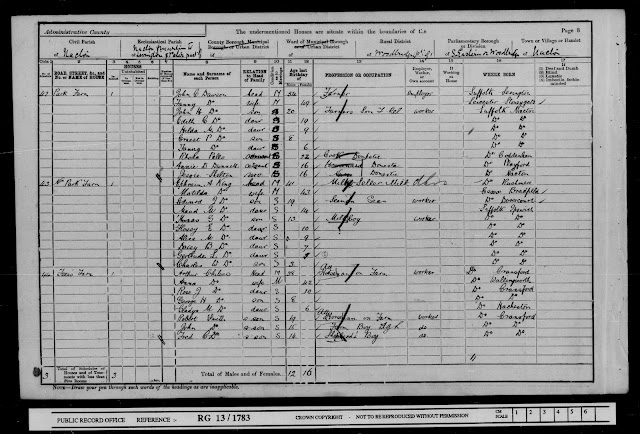 
In this census we can see that Matilda was still alive, they were living near Park Farm at Nacton, a village a short way from Ipswich, and they had 8 children living with them.  Ephraim's occupation was a Milk Seller (presumably from the farm that they were living near) and it appears that their son Thomas, aged 13 was working with his father as a Milkboy. Their son Edward, who was 19, was working as a Seaman and his place of birth is stated as Dovercourt, Essex (we now know where to look for them in the 1881 Census). Flossy was aged 10 and born in Ipswich (so we know where to look for the family in the 1891 census. Matilda said that she was born in 1858 in Bradfield, Essex, so we know where and when to look for her birth record.

The usual information is given in the 1881 Census, taken on Sunday 5 April, as well as; whether an employer, employee or neither and number of rooms occupied if less than 5. 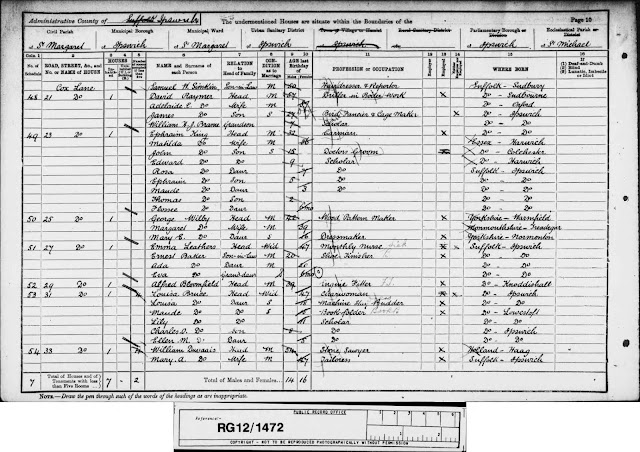 The 1891 Census Return shows that Ephraim and Matilda were living in the centre of Ipswich in 1891. The place of birth for Matilda and Edward was now stated as Harwich and Ephraim's place of birth was now Ipswich and not Rushmere as stated in the 1901 census. Ephraim was working as a Carman, which is another name for a Carter (a man in charge of a horse and cart) and John aged 15, the eldest son, was a Doctor's Groom. 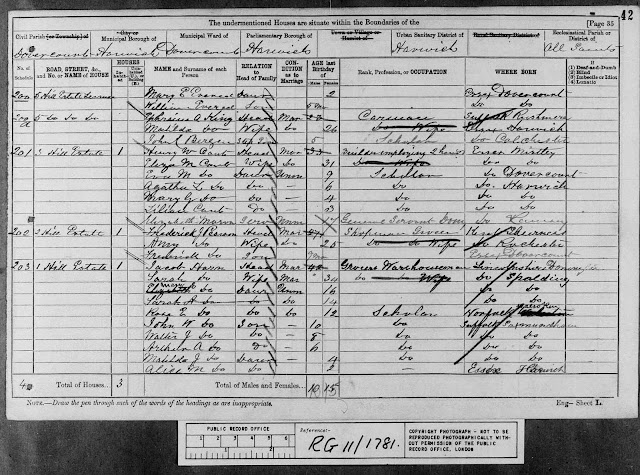 This particular document was particularly interesting but posed some more questions for future research. As was expected from the 1891 census, they were living in Dovercourt, Essex, but quite unexpectedly, it appears that John, born in 1876, was noted as the Step-son of Ephraim and had a completely different surname - Bergen. Obviously, John was not Ephraim's son.

The birth certificate of Gertrude (Mark's grandmother) as referred to in the previous post, stated that there were two other surnames for her other than her married name, and upon checking the middle name in the list, it was confirmed as Bergin (although a variation in spelling).


We will carry on with census returns in Session 3

1. Add all relevant information which appears in the census and use that information as clues to finding other information (i.e. where they were 10 years earlier in the previous census).
2. Names change over time, so look for any variations including spelling in surnames.
3. People used their second names instead of their first names quite regularly so be aware of this when searching. Double check your information by using the names of other family members.
4. The census isn't always accurate.  People often got confused with birth year and place because birthdays were not celebrated as they are now.
5. Look for other people living with your family, they may give you clues as to other branches of the family and new surnames.

Email ThisBlogThis!Share to TwitterShare to FacebookShare to Pinterest
Labels: Tutorials